What the 39Meister Program Aims to Achieve

39Meister is a project that was launched with the assistance of NTT DOCOMO’s in-house startup scheme. Startups in the United States’ Silicon Valley are bypassing Japan and going straight to China to place orders for manufacturing. In an effort to change this situation, we wanted to create a system in which startups could keep ordering their products from the Japanese manufacturing industry. This is what led to the launch of this scheme.

Because many startups do not even know the very basics of manufacturing, they do not know what kinds of processes or partners they need to give form to their ideas. On the other hand, people in the manufacturers know very little about the world of startups and IoT.

Initially, because both sides need each other, we conducted matching services to pair up manufacturers and startups in the belief that, if we brought them together, a chemical reaction would result. However, when we left it up to the parties themselves to do the rest, it did not go well. Having learned our lesson from this failure, today, we take on the startup’s business as a one-stop service, and we deal with the manufacturer by placing some of our orders with them. 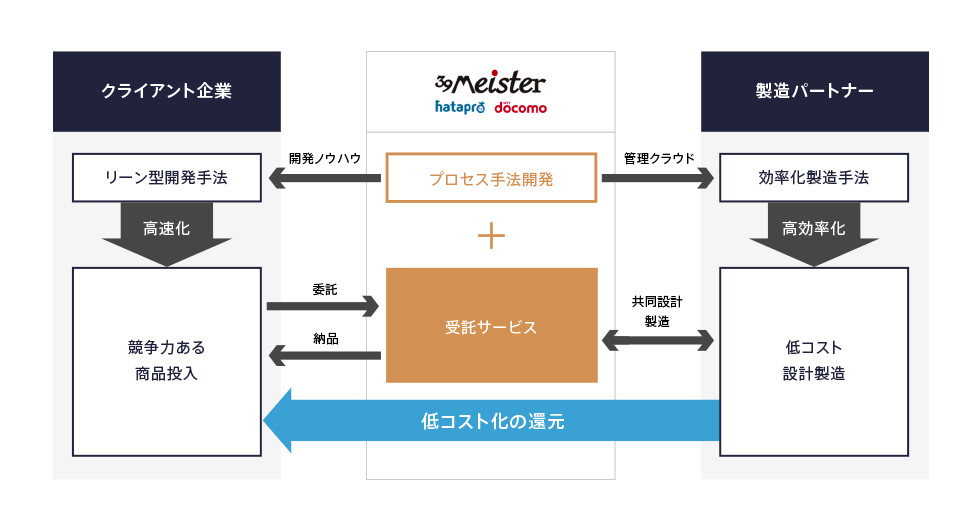 You can swipe horizontally

Serving as a cushion between the startup and the manufacturer

In the manufacturing industry, the usual process is for the party placing the order to provide detailed specifications and design drawings, after which the two parties work out the product details, price, and delivery deadline. At startups, on the other hand, they often just have passion and ideas, or at the very most, a proof-of-function prototype, and they do not have proper design drawings that can be used as a sounding board for negotiations. In these circumstances, while the startup may approach the manufacturer wanting to seek their advice as professionals, the manufacturer does not know how to handle them. From the startup’s point of view, on the other hand, they feel they have come to the manufacturer precisely because they do not know about manufacturing themselves. So when the two sides deal with each other directly, it is easy for conflict to result, with one side thinking, ‘If you’re professionals, why won’t you teach us?’ and the other side thinking, ‘How dare you come demanding we teach you and help you when you haven’t put in the minimum effort required yourselves?’ 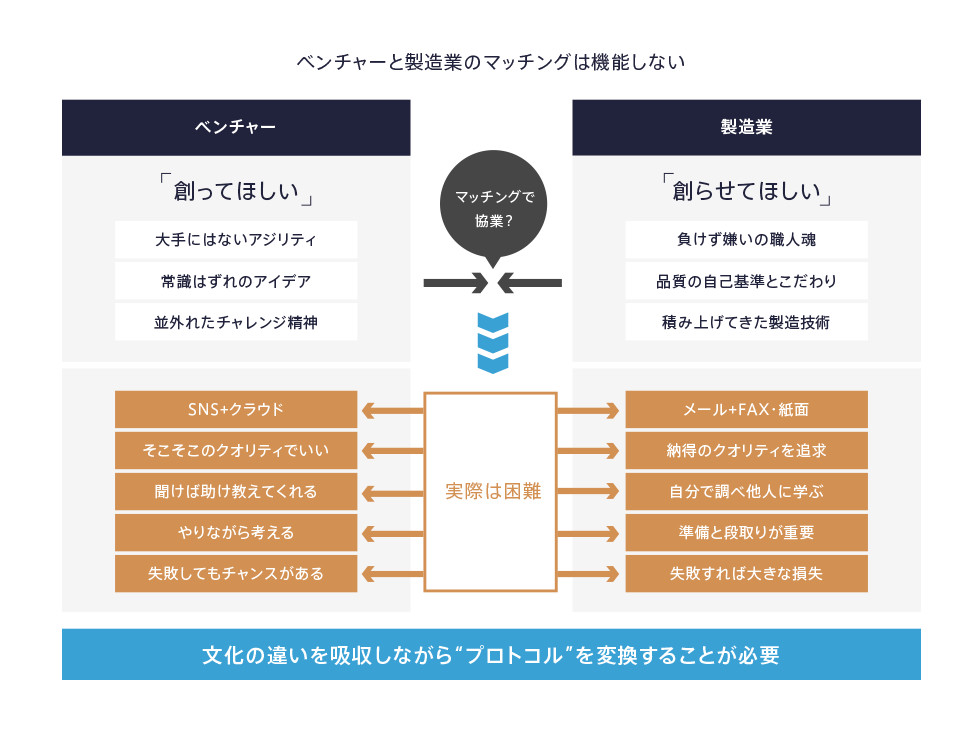 You can swipe horizontally

That is were we come in. We take on board the questions and requests for advice from the startup, and filter them in terms of the number and content of the questions before conveying them to the manufacturer. As I mentioned earlier, often, in the initial stages, startups come for advice armed only with their ideas. Say, for example, a startup has about ten ideas and comes to us for advice about how to incorporate all of those functions into a single product. At this point, we write them all up on a whiteboard, and when we press them about whether their perceived clients would really want all of those functions, it becomes clear that there are many unnecessary elements. We can work with them to narrow down their ideas to what they really want to achieve and come up with the ideal product. In other words, there is a process that the startup side needs to complete before they can approach a manufacturer for advice.

There was one case in the past in which we assisted with matching up an IT company that wanted to make a product with a local factory and it went very well. In this case, the IT company only had ideas that had gone no further than writing their elements on a whiteboard. The manufacturer, on the other hand, interviewed the startup about what they hoped to achieve with their product and what kind of customers they envisaged would use their product. In this way, they firmed up a concrete image of what the IT company wanted. Based on this, the manufacturer prepared drawings and used them to confirm the IT company’s wishes

The IT company was not able to make a proper judgment about whether size or shape was appropriate when asked about them in figures, but when they were shown them on the drawings, they were able to respond on an intuitive level with suggestions for making the item bigger or smaller, for example. Having thoroughly familiarized themselves with the product, the manufacturer took the lead very well. For the IT company’s part, that kind of treatment was ideal, but it also runs the risk of placing a burden on the manufacturer. We wanted to know why this relationship worked so well, so explored the factors. While neither party was aware of it, in fact, the most likely driving force behind the success of this relationship was the explanations that the IT company gave to the manufacturer in the early stages. The IT company explained with passion aspects such as why they wanted to make their device and what kind of changes their product bring to the company and to society. It was almost like making a pitch to investors. This struck a chord with the manufacturer. It drew from them the desire to contribute their own knowledge and know-how about manufacturing to help the IT company achieve its aims. We reached the conclusion from this example that it was extremely important to explain the reasons for making the proposed product to the manufacturer at an early stage and to get them to empathize with the project. Conversely, there appear to be more than a few startups that approach the manufacturers with the attitude of “We’re paying you, so all you have to do is make the product the way we ask you to do.” From the manufacturers’ point of view, they would be taking on needless burden and risk, so faced with that kind of attitude, why would they want to? 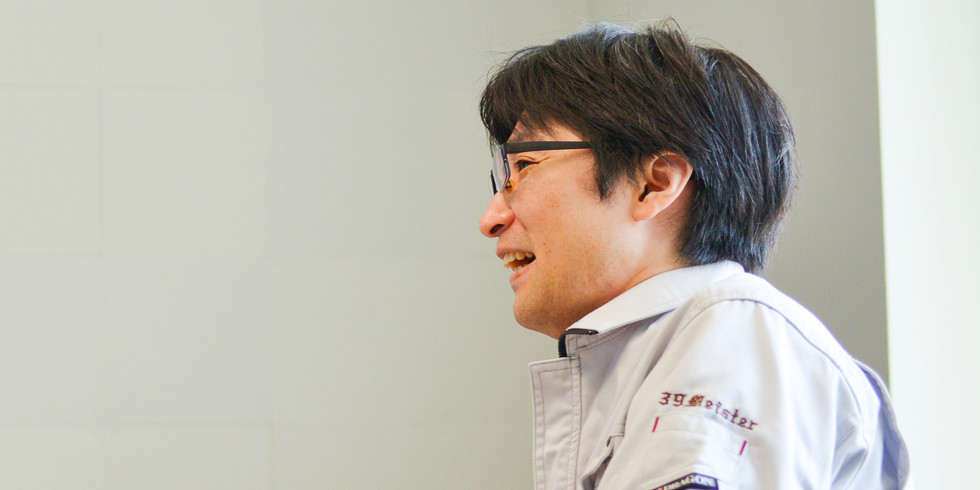 To take it further, the manufacturers also want to know how the products they have made have been received and how the companies they partnered with have grown as a result. If the client were a large corporation, there is the issue of confidentiality, as well as the fact that they do not have a culture of sharing outcomes with their suppliers. Often, therefore, these manufacturers do not find out how their deliverables have helped. With startup projects, however, there is no need to be so straitlaced. In the case that I just described, the IT company received feedback on its product at trade shows and obtained the opinions of many people. That feedback led them to discover many areas for improvement, which they fed back in turn to the manufacturer. The manufacturer, naturally enough, gained a real sense that their work had been of benefit to the startup, which had been in real trouble, and they were glad that they had done it. With this kind of successful experience, the possibilities increase for the manufacturers to assist with future projects.

In other words, although the two parties are in a relationship of customer and supplier, you could say that an important quality that startups will need to have is the ability to develop an atmosphere of a team that is working on a certain project together.

More partnerships with supporting businesses, to make Japan shine through its manufacturing once more

Of course, there is no way we can do everything ourselves, so we hope to see more and more players come on board to support manufacturing. All of the knowledge and know-how obtained through such support projects also need to be shared openly. We want the many and varied players to use that know-how that has been made available as reference when putting together new businesses, and, in turn, we want to see those new businesses grow. For Japan to restore its shine through manufacturing, it is important to transcend various boundaries and for people from different backgrounds to work together. While they may be scattered at the beginning, in the end, they will be connected somewhere and work together. I think we need big-picture thinking, in which the national government takes the lead in creating systems in which the various businesses complement each other’s strengths and weaknesses.

Personally, I get the impression that Japan has many startups that, rather than making single products or services, are better at creating ecosystems. What I mean by that is, not only do they come up with systems for gathering information using IT devices, they also bring into the picture ways for the advertising industry or the retail industry to make use of the information that has been gathered. Partly due to our own shortcomings, there is a tendency for an ultimate shortage of funds or other money problems to cause setbacks, but if we had a system for creating proper support networks, these kinds of projects could grow into big businesses that will lead the world. I said earlier that many businesses needed to participate. I think that what we really need is systems in which everyone can share what is good about startups, gather that information together, and make it bigger. It is my hope that this is precisely what the Startup Factory program will achieve. 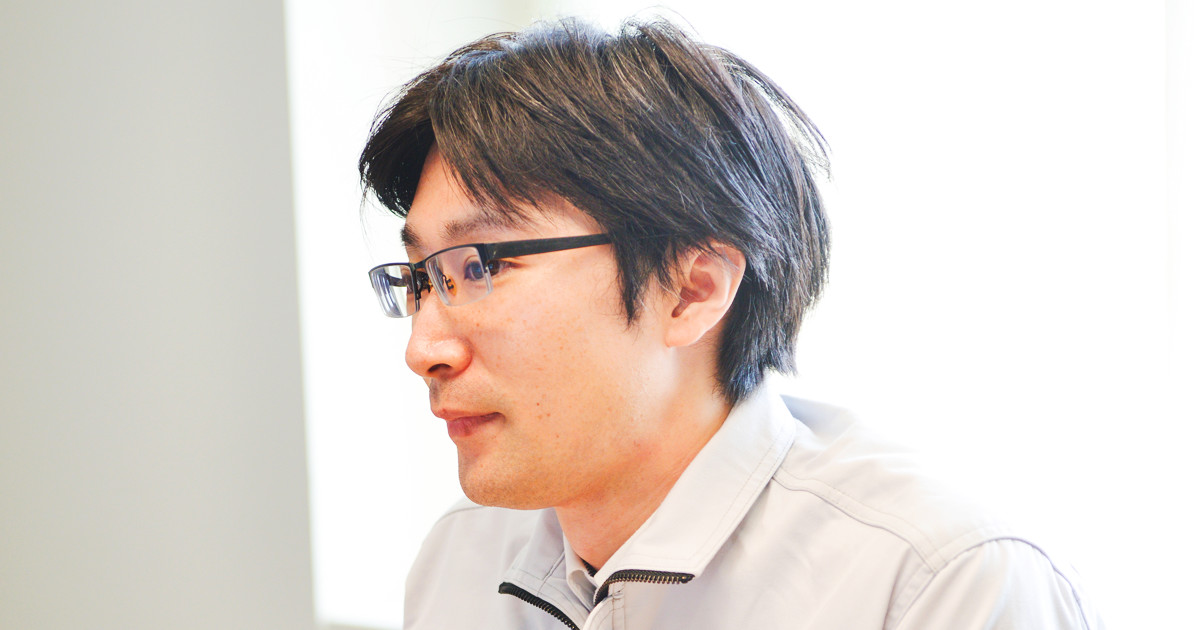